Tomorrow the 36 hole championship begins, with a purse as large as $800 this year. This year I'm playing in honor of the late Harold dog. 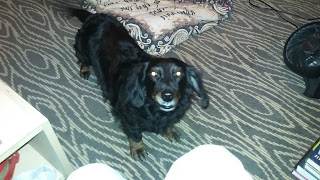 My goal is to shoot in the low 80s both days and win the second flight gross and net, maybe even come in top 5 gross overall.

Should be around 25 to 30 participants this weekend, the last championship for RR?; from my understanding they've sold the back 9 and will only have front starting next year. Not sure if will still have the men's club? Hope so.

Nevertheless, I feel more confident in my swing and game than ever before, strange, yet true. Even though it seems out of reach, I'm starting to believe that I can honestly compete tomorrow with the club set up I have now and the game have on the course mentally.

Focus on making each swing the best one possible at the time; that's all I can ask of myself, to focus and stay positive, one step ahead. Not losing focus because score has already reached tipping point. Just try to salvage and reclaim.

I've been playing golf without confidence or a mindset that I can win. I can win if I play my best golf and shoot two 78, +14, that would be very close to winning gross overall, which is what really counts.

Still, my focus now is on winning the second flight; I've been relegated to the scrubs and hackers flight and must redeem myself from it by playing better golf, starting tomorrow.

We all have to start somewhere, a 19 handicap is my adult low; I've dropped 8 strokes on average since Air Force days 20 years ago.

To be fair, I shot my best score in 2015, the last year I played with modern clubs. Honest to God 79 at EV, +7, played the back nine twice because of course rehab. 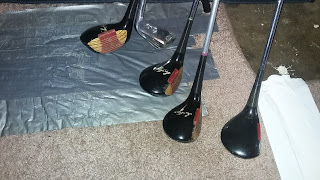 I know it's in me to play better, it's just taken time to adjust swing and game to old clubs and strong grip -- I've completely changed my swing over the last 3 years, after switching to strong grip.

I feel more confident with the old clubs, than with the modern ones. My swing feels more solid and consistent than ever, yet will this turn into good scoring, or have I neglected my short game too long?

Will find out tomorrow and report back to tell how goes in the blistering heat (95).
September 20, 2022 Update:
I did play in the tournament, yet didn't shoot anything special. Can't remember exactly what I shot and too lazy right now to scrounge through old scores, but I'm almost sure it was in the low to mid-90s both days, to come in the middle of the pack slightly at the back. I still miss Old Harold Dog dearly, he was buried in his favorite field where he spent many days chasing chickens, eating his football, and rolling around in the grass and dirt. See you in heaven buddy.

Remembering Larry Nelson: Champion at the 1983 U.S. Open at Oakmont

A Strong Grip Can Improve Your Golf Swing